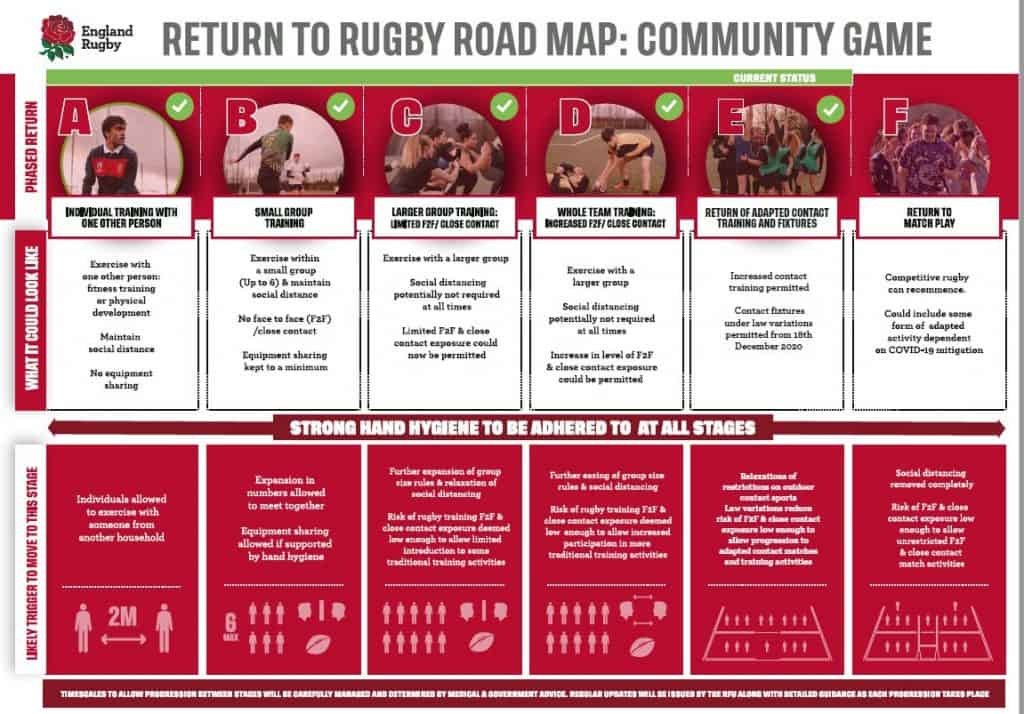 The Rugby Football Union (RFU) welcomes the news that Government has given its approval for 15-a-side contact rugby union to return at grassroots level, subject to adaptations.

This comes after extensive research and consultations with Government into mitigating the risks of close contact. By using law variations, this will limit the risk of prolonged face-to-face contact, allowing the community game to resume (everything below the Greene King IPA Championship and Allianz Premier 15s).

Clubs will be able to begin adapted training from Wednesday 2 December in preparation for local friendly fixtures recommencing from Friday 18 December when the following law variations will come into effect:

Further details on the variations (Law 5 – Time, Law 16 – Maul, Law 18 – Lineout, Law 19 -Scrum, Law 20 – Penalty and Free Kick) can be found here. These law variations will be reviewed as the season progresses and as restrictions change.

“We are delighted that our submission has been approved to return to a format of 15 a-side rugby and we thank Government for working with us to find a solution that enables the safe return of the community game,” said RFU Rugby Development Director Steve Grainger.

“In recent months, we have received growing support from clubs and players in favour of adaptations, with law variations preferable to the option of no rugby at all. This is wonderful news for community clubs, their volunteers, players and supporters around the country, who can now look forward to playing contact rugby for the first time since March.

“We now need to be as safe as we possibly can be and comply with all off-field social distancing and Covid-secure guidance to ensure we can continue our phased return to full contact rugby when it is safe to do so.”

England Head Coach Eddie Jones added: “I know how much work has gone into getting international rugby back.

“Having community rugby back is the next step in getting the game up and running and I am pleased for everyone involved in the community game, which has gone through a very tough time. They can now get excited about having rugby back in their lives.”

Clubs in all tiers will be able to return to Stage E on the Return to Community Rugby Roadmap from Wednesday 2 December. Further guidance on travel within and between tiers will be issued following publication of government guidance.

There is no obligation for players and clubs to play 15-a-side adaptations. Clubs will still be able to play Ready4Rugby matches up until and beyond 18 December.

Adapted Stage E rules/laws for Age Grade Rugby have also been approved for U7-13 and U14-18. The move to Stage E will allow the recommencing of Tag Rugby for U7s and U8s.