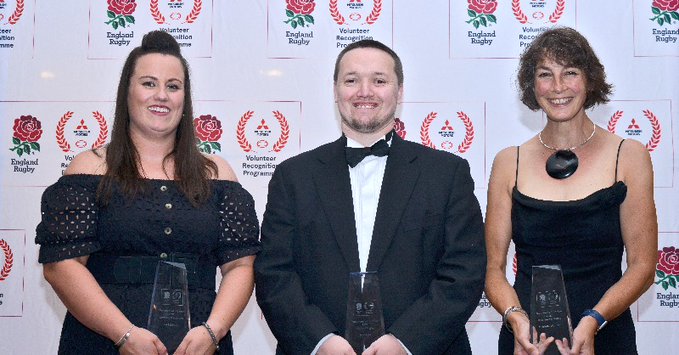 The winners of this year’s Mitsubishi Volunteer awards were announced at an event hosted at Twickenham Stadium.

The past 12 months have presented big challenges to rugby clubs.  However, while they have not been able to get together, train or play for much of the time, they have found innovative ways of keeping members engaged and many have been supporting the NHS and their local communities.

The Mitsubishi Motors Volunteer awards, in the fifth year, recognised volunteers’ efforts across three categories: Beyond Rugby, Resilience in Rugby, and Diversity and Inclusion.

A celebratory event at Twickenham Stadium saw the finalists enjoy an afternoon event pitch side, followed by dinner in the Spirit of Rugby, where winners were announced.

Scott Lake of Veor-Holman RFC, who won the Beyond Rugby category thanks to organising initiatives to help local charities. This included club support for the local food bank, a fun day raising money for a children’s charity, a Christmas present giveaway for children in local hospitals and much more.  Through Scott’s hard work the club is now embedded within their local community, and the donations have made a huge difference for many people.

Charlotte Wootton of Wymondham RFC, who won the Resilience in Rugby category, having been instrumental in ensuring that her club were able to continue operating during the pandemic. Charlie worked tirelessly to keep the club afloat, ensuring it was a safe environment, with regulations adhered to and the facilities kept well maintained to generate much needed revenue. Appointed as volunteer co-ordinator just before the pandemic, Charlie also successfully built a group volunteers ready to support the club as rugby returned.

Kat Salthouse of East London RFC, who won the Diversity & Inclusion category. As the club’s women’s representative and diversity and inclusion champion on the club’s management committee, she reinforced their commitment towards inclusive rugby. Kat has made sure that members are supported and diversity is celebrated. She was also one of the driving forces behind the innovative partnership with Kings Cross Steelers, which has seen the delivery of joint events to introduce the game to those who may not have played before.

Said RFU President, Jeff Blackett, who presented the awards on the night: “It was a real pleasure to be able to thank all of our final outstanding volunteers. Every one of the 52 volunteers recognised have given up huge amounts of their time for others and they represent the 100,000 volunteers who do so much for our sport. Our three Volunteers of the Year richly deserve their awards and I hope that they enjoy being guests with their partners at one of Twickenham’s autumn internationals. They are a fine example of all who have kept their clubs going during the pandemic.”