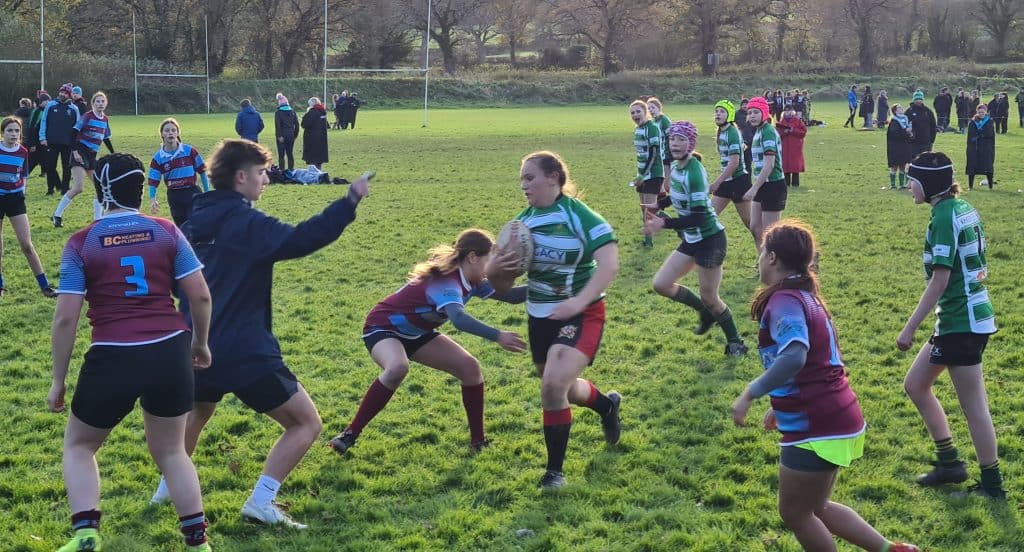 The sun was out and the winds of Storm Arwen had petered out, but a different force of nature descended from the north Cornish coast to wreak more havoc on Sunday’s second stage of the CRFU’s XRugby competition for girls, as Newquay and Perranporth officially combined in both the U15s and U13s to continue their unbeaten runs in the competition.

Newquay & Perranporth U15s – alongside a pair of talented St Austell players – secured maximum points on the day, with only Truro & Liskeard in the last game coming away with anything to show for their own efforts. They weren’t the only force from the north coast to make waves either: Bude continued their own impressive start to the competition by splitting into two squads and each only losing to the table-toppers. Truro & Liskeard took league points from every game they played, and their opening draw ensured that Launceston – also ably assisted by St Austell – secured their first points of the campaign, as well as from a hard fought bonus point against Bude B.

Not to be outdone by their older clubmates, the Newquay & Perranporth U13s also joined with a St Austell player and grabbed an impressive clean sweep. Launceston came closest to upsetting the visitors, losing by only a single point, as well as participating in a blistering 38-38 draw with Truro & Liskeard and only falling short of matching Camborne by a single try as well. Camborne, Bude and Truro & Liskeard all pocketed wins and but every team’s defence was noticeably improved from Stage 1, promising to create even more tight and exciting games as the season progresses.

Last but far from least, the Launceston U18s continued their own 100% record in the competition with emphatic wins over their opponents. With only a handful of Belerions players able to attend, those that made it joined up with Truro Bengals to inflict a handy defeat upon the Truro Siberians, but the Siberians in turn managed to restrict Launceston to a narrower scoreline than their clubmates.

So at the halfway stage of the league competition, the U18s and U15s tables now stand as follows: