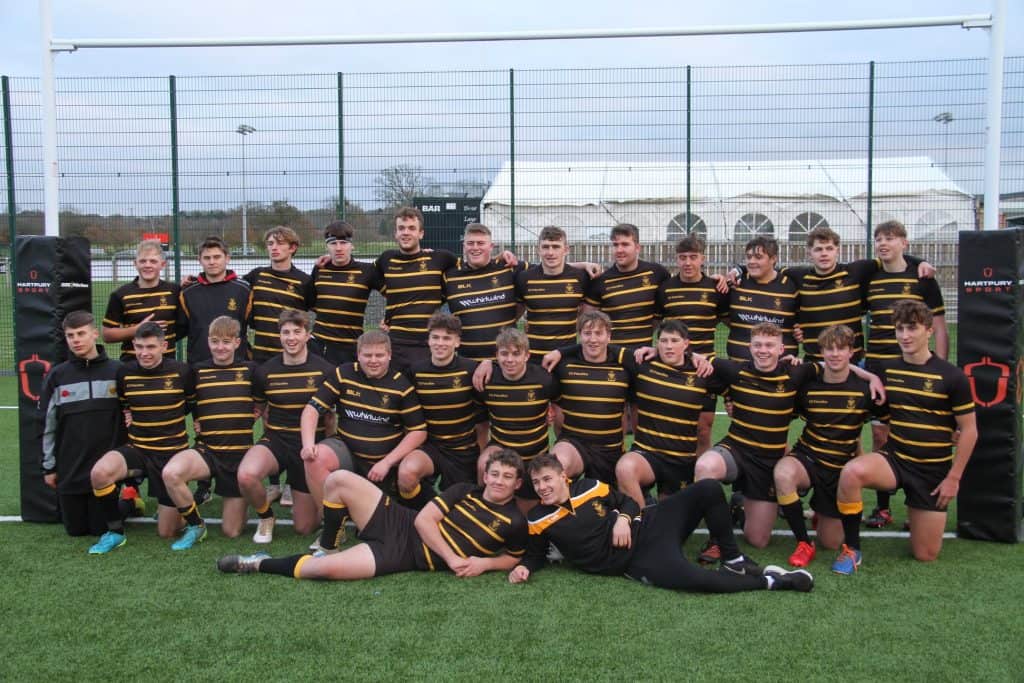 This campaign has been a challenge from the off with the RFU withdrawing funding and Covid-19 ensuring that the normal timelines were very much condensed resulting in a impact to our normal preparation. That said we had more than 110 players trial for the U18s and as always our clubs, colleges and schools have been incredibly supportive of the Cornwall Representative U18 team and for that we are hugely grateful.

An early morning 07:45 pick up by Williams Travel at Chiverton Cross made for a quiet bus as 26 bleary eyed 16-18 year olds made there way to Hartpury in Gloucestershire for a 14:00 kick off against the boys from Buckinghamshire. On arrival at midday we were faced with a cold, strong wind that we were to play into in the first half.

Unfortunately we lost a couple of players just before kick off due to illness which meant our team manager had to scurry back and forth to the selectors meeting room to update them of the changes.

Dean Wills the Redruth stand off got the match under way and the initial encounters were pretty even but played within the Bucks half. The first scrum of the game came off a Bucks knock on, on the Bucks 10m line and Cornwall were quick to assert their forward power to win a scrum penalty. The open play and break downs were quite messy in the early stages but Luca Roberts the Cornish lock was showing good industry at the breakdown to win turnover ball to provide a platform to build upon and ensure our boys had good territory.

The next scrum had our boys going forward at a rate of knots only to be judged to have pushed beyond 1.5m and Bucks were awarded a free kick which they moved the ball left and created a good line break and were accelerating to the Cornwall try line, however Harvey Penhallurick at full back came hurtling across with a huge cover tackle to take the Bucks winger into touch. This was the first of 3 excellent try saving tackles Penhallurick would go onto make in the match.  From the subsequent line out Jarred Williams the Cornish hooker executed a sweet lineout throw and the team worked their way back up the pitch with the help of winning an offside penalty and then another free kick for an early shove in the scrum from Bucks. It was from this free kick after 13mins of play that scrum half Ben Bebb supplied good ball to Dean Wills who made a great run, sucking in the defenders for an equally excellent off load to centre Tom Hollyman who with still work to do had too much power and pace to be taken down and from 15m out went over to register the first points of the match. 5-0

This score was the catalyst for a period of dominance for Cornwall with Bucks making a number of unforced errors such as not straight lineout throws, scrum penalties and knock on’s. It was through another unforced error that a loose Bucks pass was picked off by winger Harvey Orchard on the right wing to show the Bucks boys a clean pair of heels and finish smartly in the right hand corner to extend the score 10-0 to Cornwall.

Cornwall obviously high in confidence started to relax, possibly too much and were forcing the game, as a result the Buckinghamshire boys came back into the game and countered well and if it were not for the tenacious Harvey Penhallurick  putting in another fine cover tackle were sure to score.  Bucks continued to exert pressure,  helped by knock on’s from Cornwall and clever Scrum Half play picking off the base of the scrum and using the wind to kick deep into the corner resulting in our lads having to take the ball back over our own try line and dot down. This gave Bucks a 5m attacking scrum on the 28min mark and they managed to cross our line to register their first points. 10-5 We should have taken note at the Bucks scrum half threat at the scrum time at this point.

Following a Bucks ruck infringement we secured a lineout 10m into the Bucks half with Magnus Busby imperious in the air securing good ball we ship the ball to our left wing who shows incredible feet and strength to dart down the left wing beating four defenders to cross the line under huge pressure to dot the ball down with one finger for possibly the score of the match. 15-5 on 31mins.

Cornwall then stole lineout ball only to knock on, from the subsequent scrum the Bucks 9 breaks again and it takes the third try saving cover tackle from our fullback Harvey Penhallurick to thwart the lively opposition scrum half.

With the match official about to blow for half time, Cornwall infringe at the breakdown and Bucks kick well using the wind at their back and secure a 5m lineout from which they lineout maul and drive over for a fine forward score that we would be proud of, to close the half Cornwall 15 – Bucks 10.

Cornwall unload their entire bench of 8 new players as we are obliged to do with the half a game rule.

Bucks from the kick win good territory resulting in an early scrum 10m off the Cornish try line and that Bucks 9 again picks off the base and runs blindside unopposed to level the scoreboard 15-15. Not the end of the first half we wanted or the start of the 2nd half. It is not until 9 mins into the 2nd half until our boys start to assert themselves and its our dominance up front that wins another scrum penalty and dissent from Bucks see’s them marched back a further 10m.

Cornwall then suffer the blow of losing fresh on, replacement right winger Ollie Crawford for a high tackle that at the time I thought was harsh but the photographic evidence suggests that his subsequent sin bin time on the bench was probably justified. The next period of play was scrappy from both teams with Cornwall getting pinged for an early lift in our line out and both teams not securing their own ball at the breakdown. The Cornish blindside flanker Harry Tomlin however was happy to profit from this, winning good turnover ball which as a good reward for his industrious work all game.

Jack Commons the Redruth centre was next to benefit from the Bucks handling errors and neatly collected a loose ball off his boot straps during a knock on advantage to run strongly and break the tackles and finish under the sticks to nudge us back in front 20-15 14mins into the second half.

Dean Wills was the next to get on the wrong side of the match official whilst defending 20m off the Cornish line he was judged to have taken the Bucks player beyond the horizontal and as such had to spend some time in the bin. From this penalty Bucks kick for an attacking lineout and score in the left corner to again level the game 20-20 at the 24min mark. This was to prove the Bucks final attack as our Cornish players dominated the last 10mins of play.

Harvey Penhalurick fittingly after his fine defensive display in the first half was to show his abilities in attack to score in quick succession on 31 and 32mnin to take the victory for Cornwall 30-20.

Ben Smith our replacement hooker unfortunately took a knock on his shoulder and back rower Dom Stanislavacius also injured his ankle in the last 10mins but we hope neither are serious injuries. Bucks suffered a shoulder dislocation and we wish the player well. We look forward to our next match against Dorset & Wilts at Hartpury on 9th Jan 2022.