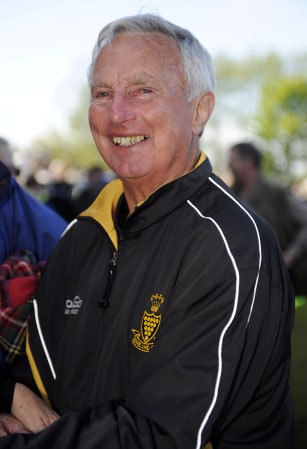 The following was written by former CRFU President Dave Martin. It is with deep regret that I have to report the sad death of Dave ‘Benji’ Thomas, the former Cornwall County Coach.
83-years old ‘Benji’ passed away, after a short illness, surrounded by his family, on Thursday 10th February 2022.

‘Benji’ will be remembered as the successful Cornwall Coach on that famous day at Twickenham in 1991 when Cornwall defeated Yorkshire by 29 points to 20, after extra time, to lift the ADT County Championship Trophy.

‘Benji’ also pioneered the CRFU Schools of Rugby long before the RFU introduced a similar scheme. He and his team of coaches developed a ready-made pool of talent for clubs at all levels in the County. He also nurtured that large number of excellent coaches, who are now serving Cornwall’s representative teams and many clubs.

His loss will be felt, not only at his club, Penryn, but, throughout Cornwall.
Our condolences go to all his family, particularly his wife, Valerie, and daughter, Helen.

Apart from being the coach of Cornwall in 1991, Benji was in his own right a very fine player. He was part of the fine Penryn side of the 1960’s that dominated local rugby at that time.

Educated at Falmouth Grammar School and Cardiff College of Education, he also played for Berkshire, before taking up a post at Penryn Secondary Modern where he remained until retirement.

He played for Cornwall as a player on 21 occasions from 1959 until 1970, when his playing career finished he turned to coaching and was involved with Penryn, Falmouth and St. Ives.

He had a great affinity with the Cornwall supporters, whom he called “Cornwall’s 16th man.”

A life member of CRFU, in 1994 he was made a bard of the Cornish Gorsedh with the bardic name Map Meler, Son of Mylor.

The President of Cornwall RFU, John Sumnall and the Management Board of the CRFU wish to express their sincerest condolences to “Benji’s” family and friends at this time.

Funeral arrangements are mentioned below;

David THOMAS (Benji) on 10th February 2022, peacefully at home, David (Benji), aged 83 years of Penryn. A 10much loved and devoted husband, father and Bampa, he heard the final whistle after a full 80 minutes, with extra time. Funeral service in Trelawny Chapel, Penmount Crematorium on Friday 25th February at 3.15pm. The cortège will leave the house at 2.10pm proceeding through Penryn and via Pendennis Point, prior to the service, for anyone unable to attend. Family flowers only, but donations in lieu, if desired, for the RNLI may be given by retiring collection or c/o Kingsley Tresidder Funeral Service, Mill Stream Funeral Home, Mill Yard, Ponsanooth, TR3 7EF, 01872 863607. At the family’s request please could any gentlemen attending, who are rugby club members, wear their club blazer and tie, and ladies a brightly coloured scarf.

Afterwards mourners invited to reminisce about Benji at Penryn RFC.